A pilot uniform is the clothing worn by pilots, consisting of trousers, a shirt, a tie, a blazer, shoulder epaulets, and in some cases also a cap. However, pilot caps are gradually being abandoned by the aviation industry. In case of female pilots, uniform is usually the same, just adjusted to fit the women body.

Before the 1930s, commercial pilots wore clothing derived from the attire used by military pilots during the war, consisting of a leather jacket, a scarf to protect the neck, loose trousers, and a soft leather helmet.

This changed in the 1930s when Pan Am (Pan American World Airways) decided, for the sake of their passengers, to dress their pilots in formal outfits inspired by the naval forces. One of the reasons was that at that time Pan Am operated transatlantic flights on the Boeing 314 aircraft, known as flying boats. Pilots therefore began to wear black trousers, a blazer with rank designation on the lower sleeves, an officer-style cap, and a gold or silver insignia with their name – much like naval officers.

This change instantly became a huge success, as the passengers felt much safer and trusted their pilots more. Uniforms therefore also help to establish the pilots’ sense of authority among the public. As air travel expanded, pilot uniforms became standardised and today they are widely used in the aviation industry.

Rank designation: What is the pilot shoulder stripes meaning?

In order to distinguish their ranks, pilots wear epaulets. However, the designation is not always consistent and may vary in different flight schools and airlines.

Below you will find several examples of typical rank designation:

The stripes may be silver (such as in British Airways, Norwegian) or gold (such us in Ryanair, Emirates). The colour does not indicate rank in any way – it is up to the individual airline or flight schools to choose the colour. 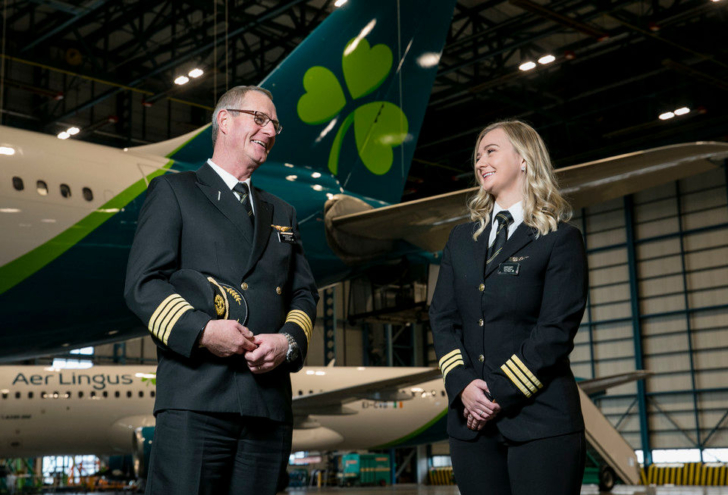 Photo: Pilot uniforms in Aer Lingus. Captain on the left side and female First Officer on the right side.