What is base training?

Base training is part of the pilot training, which takes place between type rating (simulator flying) and line training. All it means is standard VFR patterns around the airport. But unlike your single engine PPL training, now you are going to fly a large airliner, for example Boeing or Airbus. But still without passengers.

Although simulators are very modern nowadays, flying a real airplane is still somewhat different. Base training is here so that you can get used to it. In general, a simulator follows a more stable path when flown manually, but each simulator is slightly different.

In airlines, base training is usually flown in a group of cadets. In business jet aviation it may be done individually. According to regulations, every trainee pilot should complete at least 6 take-offs and landings, which usually takes around 1 hour to complete.

In the left-hand seat there is a line training captain (LTC) sitting with you. In the jump seat behind there is a safety pilot in case the LTC becomes incapacitated for any reason.

Base training is about manual flying, no autopilot, no autothrottle. Approach and landing are without ILS or any other means of instrument guidance. The manoeuvre is fully visual with PAPIs only to help you asses the vertical profile.

It may happen you get vectors out of the airport traffic pattern for a while, as the other scheduled commercial traffic has priority.

Note: In some airlines special simulator session takes place before the basetraining. It’s called PSCT (Preliminary Simulator Circuits Training) and it’s basically base training in the simulator. Especially landing phase of the approach is trained in this session. 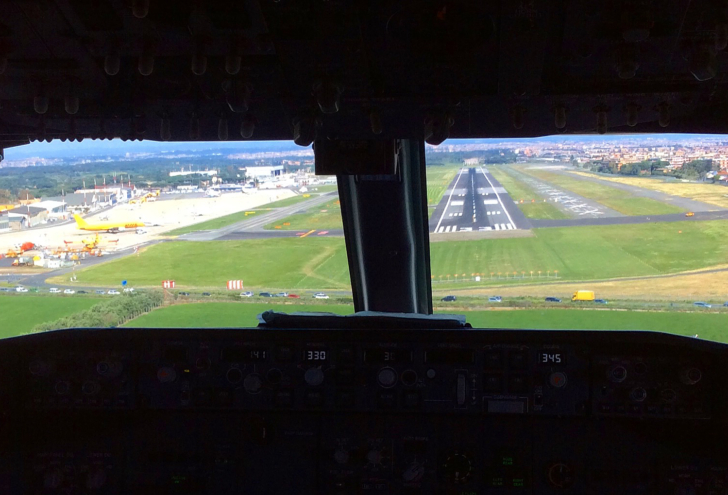 Photo: In base training you are going to land a real big airplane for the first time. Although it’s very challenging, it’s also the first time you can say “I did it!”.