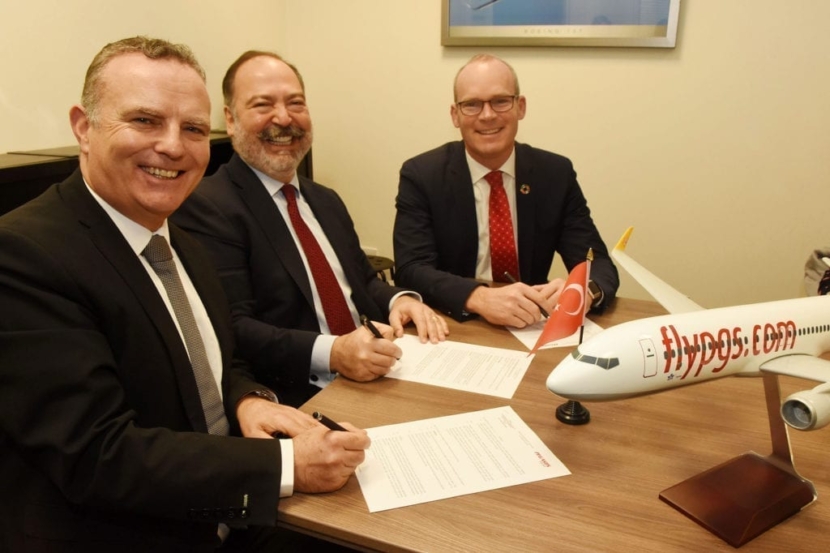 Atlantic Flight Training Academy has teamed up with Turkish budget airline Pegasus Airlines to offer a new training scheme for aspiring commercial pilots. Training will take place over 2019 and 2020.

A total of 20 pilot cadets were selected to take part in the programme and will benefit from 18 months of aviation training in Cork, Ireland.

A number of special guests attended the official launch of the training partnership between AFTA and Pegasus. They included An Tánaiste and Minister for Foreign Affairs and Trade Simon Coveney, Pegasus Airlines CEO Mehmet T. Nane and Manager for Fintech, BPO, Business and Consumer Services, Entreprise Ireland, Enda McDonnell.

Commenting on the new initiative, Simon Coveney said that Ireland enjoyed international recognition for its role in aviation, given that half of the world’s leased aircraft are managed from there. This was a feat even more remarkable given the small size of the country, he added.

Mr Coveney went on to recognise the achievements of the Atlantic Flight Training Academy, based at Cork Airport, which in 2020 will mark 25 years of training students from Ireland and around the world.

Mr Coveney expressed his pleasure in announcing the partnership between Pegasus Airlines and AFTA, and wished pilots who are to take part in the programme a successful future.

Pegasus Airline CEO Mehmet T. Nane also remarked on the partnership, saying that creating jobs in the aviation industry was one of the airline’s main drivers. This meant that the airline prized training programmes such as the one just launched, and he expressed his delight that Turkish student pilots would be receiving a high standard of training in Cork.

Mr Nane added that the airline was looking forward to seeing the future pilots on Pegasus flights.

In his speech, Managing Director of AFTA Capt. Mark J Casey said that the academy was proud to have been chosen by Pegasus Airlines to deliver training to future commercial pilots.

He said the partnership was evidence of AFTA’s strong track record in helping airlines from around the world to train pilots to a high level in a stimulating and supportive environment.

He acknowledged the forthcoming 25th anniversary of AFTA’s training programmes and said that the academy was welcoming another 25 years of rolling out their business across the world.

Commenting on the partnership, Enda McDonnell, Manager Fintech, BPO, Business and Consumer Services, Enterprise Ireland said that AFTA and Enterprise Ireland has been working together since 2010 and that the academy trained pilots using both aircraft and simulator technology.

He said that the flight school was well-known for its partnerships with airlines, as well as with the Cork Institute of Technology’s Business with Aviation Studies scheme.

Mr McDonnell concluded by saying that the new partnership was an important development and that Enterprise Ireland was committed to collaborating with AFTA as it continued to expand its scope for high-quality training.

At the moment, there is no way how to apply for this scheme. The first 20 cadets to be trained were already selected. However, the co-operation may grow in upcoming years.

Pilots with completed training can apply for the position of Pegasus Airlines pilot via the company career website.